So it may be known, that Grand Master Roberto A. Presas, Lakan Sampu (10th Degree) Modern Arnis and only survivor of the original 3 Presas brothers, by his leadership and wisdom decided that it is time to give recognition for the spreading of Modern Arnis in the USA, the country where his brother and founder of Modern Arnis, GM Remy A. Presas,Sr., taught for 25 years until his final days.

GM Roberto Presas wants to honor these 3 individuals (in no particular order):

Grandmaster Datu Kelly Worden for making Modern Arnis his own in his Natural Spirit International, NSI, what GM Remy Presas always told his students to do and his untiring effort through seminars, camps and videos, to acknowledge Modern Arnis as GM Remy Presas’ contribution to the martial arts world.

Grandmaster DAN ANDERSON for his life long propagation of Modern Arnis through seminars around the world, books and videos, where he unlocked the hidden secrets of GM Remy Presas by analyzing his movements, strategies and teachings and for finding his own approach to make Modern Arnis his own in his MA80.

Grand Master MoTT BRIAN ZAWILINSKI for his life long loyalty to the teaching and principles of GM Remy A. Presas through his worldwide seminars, camps and teachings as well as for the continuing effort to spread Modern Arnis in groups with different lineages and for making Modern Arnis his own in his “The art within your art” (TAWA).

for their lifetime achievements to the rank of : 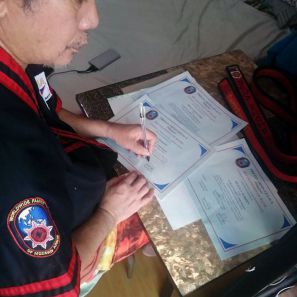 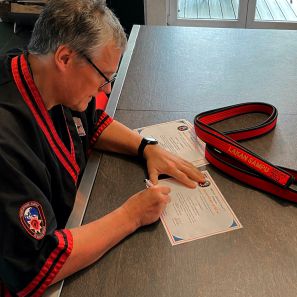 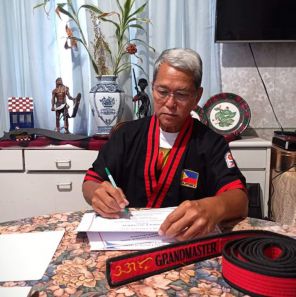 Their rank & title is recognized by the International Modern Arnis Federation- Philippines (IMAFP), the homeland federation of Prof. Remy A. Presas, Sr. The award took effect on the date of signing. The certificates have been issued and signed by GM Roberto A. Presas and and will be personally handed to the new Lakan Sampu’s as soon as the the pandemic restriction is cleared. Mabuhay and congratulations from the Philippines ! 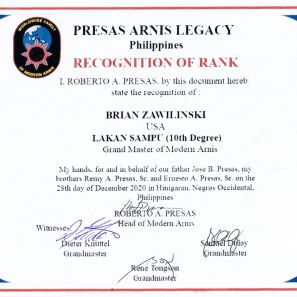 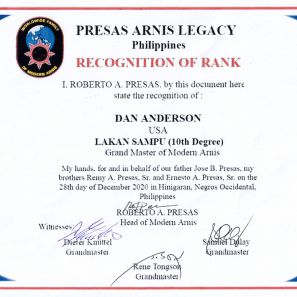 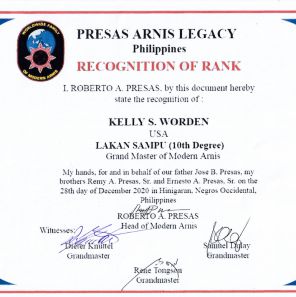 Congratulations to the three new Lakan Sampu of Modern Arnis:

(Sgd.) RENE R. TONGSON
Chairman of the Board of Trustees